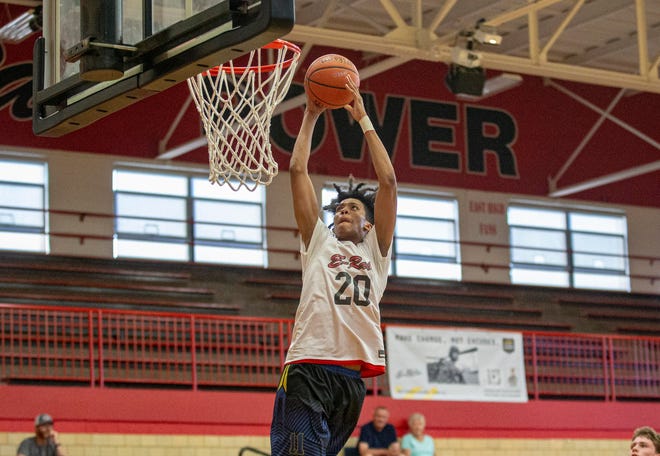 ROCKFORD — It’s only summer. The Illinois High School Association boys’ basketball season is nearly five months away, the playoffs nearly eight. Hononegah was missing star center Brayden Savitski-Lynde, who was competing in a volleyball tournament, and Boylan was not entered.

Still, the East Summer League has been a definite forerunner for years.

“Looking at the past trophy champions, whoever won the league had a very, very good regular season,” East coach Roy Sackmaster said Tuesday night after the East beat Auburn. 62-59 in the semi-finals, then beat Guilford 59-51 in the finals.

“Last year Lutheran won it and made it to supersection (class 2A). It’s only the second time we’ve won it and the last time was when we went down in the state. Winnebago won it the year they went to the state championship game (2A). It’s a good measuring stick.

“I wasn’t sure we could do that. It shows we have what it takes. Hopefully we can take it in the regular season and run with it.”

Here are the top five things we learned from this year’s 16-team summer league, which ended in a two-day tournament of 40-minute games with a clock:

Lewis had a quiet junior season, averaging 5.9 points and 3.2 rebounds. But the 6-3 senior was big on the inside this week, paired with 6-5 senior Matthew Hoarde, who wandered all over the pitch, to give East a dynamic pair. Against Auburn, Lewis and Hoarde scored 23 of East’s last 26 points. Lewis finished with 21 points against Auburn and 13 against Guilford and guarded both teams’ leading scorers, playing center against Jones and defending Guilford all-conference forward/guard Mekhi Dolby.

“We’ve been playing together since our freshman year; our chemistry is there,” Hoarde said. “It’s fun to play with him. He provides defense, rebounds, scoring, assists. It gives us energy.

More basketball:Meet Rockford’s 2022 Men’s Basketball Player of the Year and All Regions Team

Expect Lewis to play a much bigger role for the E-Rabs (24-10 last year) this winter.

“Last year we were almost too deep,” Sackmaster said. “We were trying to find nine and 10 guys who play. I couldn’t find that rhythm with everyone and Antonio sometimes got lost in the mix. I knew he had this ability. Now he has the opportunity to do so and he takes it. He is able to finish on the edge and he can hold any position.

Auburn can be explosive

“We’ve got a lot of guys who can knock down a lot of shots,” returning conference guard Adrian Agee said. “We have a lot of high flyers. We have Mike Jones, we have 3 balls. We have guys who can take it to the edge. We have people who can dunk the ball.

And they also still have a long way to go. The Knights blew a 44-33 lead against East by making just six field goals in the final 17 minutes.

“It’s shot selection,” Auburn coach Bryan Ott said. “Those are the cautious shots we take. We settle instead of working to get a good one.

It can be easy for Auburn to pick up bad habits because Jones so often turns bad shots into good shots. Auburn didn’t give Jones the ball much in the second half, but he got it himself. Four of those six baskets in the final 17 minutes have come off Jones’ offensive rebounds, three in a row he handed in and one he gave away for Auburn’s only 3 in second period.

“He just kills you,” Sackmaster said. “It’s such a load there. It is sometimes their best attack. It looks like they were just getting a 3 kick-out, a 3 kick-out, or an offensive rebound. You need to keep it away from the boards. It is their most dangerous unconventional offense. Take a hit. Sometimes they come in and other times Mike cleans up.

Guilford has a little big man

Led by all-conference guard/forward Malachi Johnson and Mekhi Dolby, Guilford tied Boylan and East for second place in the NIC-10 last year. It was the Vikings’ best result in 15 years. They had finished last in four of the previous 10 seasons, so it was a big leap forward for Guilford. But Guilford was not tall. The Vikings are still not. But Cinco Gary senior 6-3 played big on Tuesday. He had a team-high 15 points against East, doing all his damage in the paint.

“Cinco played well,” Guilford coach Chris Dixon said. “This is his third year at university. It’ll be good once we get him involved a bit more.

“We’re still struggling to get high, but it’s going to be a competitive conference. East and Auburn know we’re knocking on the door. They know we’re right there.

And Cinco Gary knows he will have to continue to play big on defense as well.

“We have to keep the guys out of the paint,” Gary said.

East was thrilled with his defense on Tuesday. Auburn not so much.

“We preach defense,” East’s Hoarde said. “The defense facilitates the attack. We were led by the defense.

Although it was Auburn’s offense that stalled in the second half against East, it was the defense that bothered Ott the most.

“For a defensive team, we struggle to keep the ball and we don’t finish possessions with boxouts,” Ott said. “It hurt us. We had a double-digit lead for most of the game and we managed to squander it because we don’t stop the ball and they had second and third chances because we didn’t box.

“We learned that we still have work to do to be the team we think we can be.”

Who has the courage of the championship?

When East trailed Auburn 38-28 at halftime in the semifinals, Sackmaster had no special instructions for his team.

“I just told them to go out and play basketball. Compete and see what happens,” Sackmaster said. “Being able to play in big games – either you have it or you don’t. It shows we have it.

Maybe. It was June, after all, not March. Auburn and Guilford also showed their potential, with Guilford edging Lutheran 53-51 in a tense semifinal and Auburn bouncing back to beat Lutheran 81-66 in the third-place game. They just didn’t cash in all the way. But the real chance for this is in March, not summer.

“That,” said Hoarde, who had 19 points in East’s win over Auburn and 12 of the E-Rabs’ first 24 points against Guilford before experiencing cramping issues, “it’s just that we put set up our chemistry for the regular season so we can go win the NIC-10 and eventually go down. It was just a warm-up.”

Matt Trowbridge is a sportswriter for the Rockford Register Star. Email him at [email protected] and follow him on Twitter at @MattTrowbridge. Sign up for the Rockford High School newsletter at rrstar.com. Matt covered sports for the Register Star for over 30 years after working for newspapers in North Dakota, Delaware, Vermont and Iowa City. He grew up on a farm in northwest Minnesota with six brothers and one sister. Her four daughters are all graduates of Rockford Public Schools.