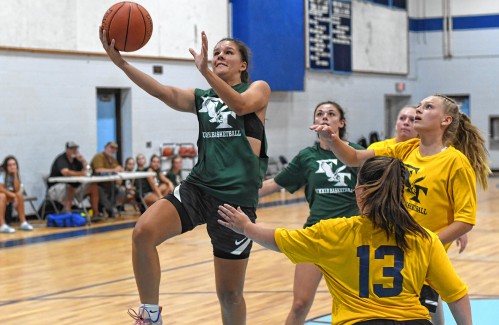 TURNERS FALLS — The Frontier women’s basketball team lost their first game in the Franklin Tech Summer Basketball League, but since then they’ve looked a lot like the team that made a run in the MIAA division. 4 tournaments a season ago.

The Redhawks took on the undefeated Franklin Tech on Tuesday and took a 23-13 lead at halftime.

Behind a strong defence, Frontier led to the finish, claiming a 40-23 win in the final game of the evening.

“It’s been going really well so far this summer,” Redhawk said Kylie Laford. “We lost our first game against Pioneer, but it was our first game of the summer season. Since then, we have outdone ourselves and won every game since. We are improving gradually with each game. We work hard in this heat.

Frontier takes advantage of the summer to improve the defensive side of the field.

Whether it’s getting drills, working on rebounds or changing defenses, it’s been a productive summer for the Redhawks.

“We’re working on boxing,” Laford said. “We did a lot of exercises like that. We are working on off-ball movements, screens and our two defences. We are really working on our 1-3-1 defence. This is our strength and making it even better will make us a better team together.

As with most gyms in mid-July, the heat was a factor for both teams on Tuesday. Laford hopes the summer league will get his team fit for the upcoming season.

“With the heat, it’s got us in shape for the season,” Laford said. “Even if the season is not before winter, it helps us prepare.”

Claire Kirkendall led Frontier with nine points in the win. Delaney Fifield and Madison McKemmie each had six points, Olivia Machon and Molly Gates had five points while Laford sank a three in the victory.

Tuesday’s second game saw Greenfield take a 29-16 halftime lead against Pioneer before racking up 20 second-half points to pull away with a 49-32 win over the Panthers.

“It’s a lot of fun,” Cecunjanin said. “It’s cool to see how people have improved and how teams have improved. It’s a great competition. »

It was the fast breaking game that did the job for Greenfield, who was able to run in transition and get easy buckets in the paint.

Moving the ball and playing as a team is something the Green Wave is working on during the offseason.

The hard work in the offseason shows throughout the summer, and Greenfield players said they like how it has gone so far.

“We certainly took a few steps forward this summer,” Cecunjanin said. “We have more open layups, we’re getting more rebounds and we’re not afraid to drive and get to the foul line.”

The opening game of the night saw Mahar play stifling defense to claim a 36-6 win over Smith Academy.

The Falcons didn’t score in the first half.