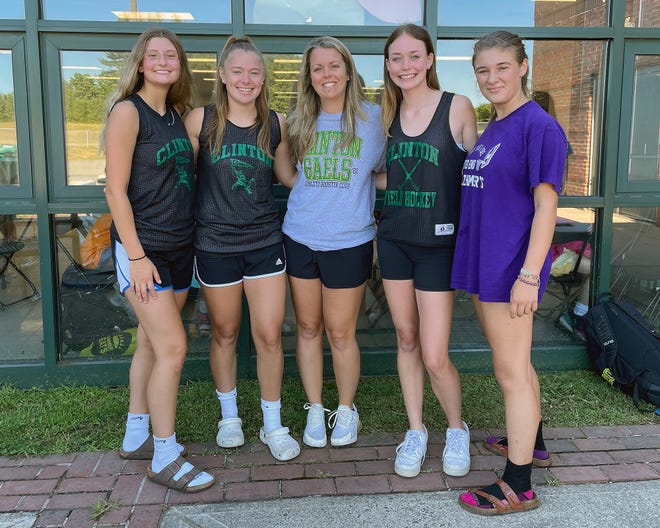 BOYLSTON — The Tahanto Regional High School Girls’ Summer Basketball League, which helps players hone their hoop skills for the winter season, is in full swing at the school.

In the summers of 2018 and 2019 the league was hosted by Assabet, and in 2020 there was no league due to the pandemic, but has since moved back to Tahanto for the past two years.

The 10-team league runs from late June through the first week of August.

“This is the second year we’ve had it (summer league) in Tahanto,” McCarthy said.

“The reason I wanted to bring the league back was because it was a good opportunity for the Tahanto girls to play competitive off-season basketball,” he said. “We’ve had a lot of success with the league over the past two years.

“We have 10 very competitive teams and that has led to parity in the league, and that’s what you want in summer basketball,” McCarthy added. “I would like to expand to 12 teams in the future, but 10 is always good.

Each team plays 10 regular season games, before the start of the playoffs at the end of this month, with each team qualifying regardless of their record. The league championship game is scheduled for Monday, August 8.

McCarthy, who can’t coach his summer basketball team due to Massachusetts Interscholastic Athletic Association (MIAA) rules, was thrilled to have Tahanto Regional graduate and former player Meg O’Day coach his team this summer.

“Meg O’Day has coached the summer league team for the past four years,” McCarthy said. “I’m so lucky to have a young adult, who knows the game and is great with kids, coaching the team.”

Games are played on Mondays and Wednesdays at 5 p.m., 6 p.m. and 7 p.m. There are two 20-minute halves, with two officials in each game.

“Tom (McCarthy) has been really good to me and the league,” Dave McCarthy said. “He takes care of all the officials and we’ve never had a problem.”

O’Day, a recent graduate of Worcester State University, majored in health education and is looking to become a physical education teacher.

“Things are going well with the summer team, and over the last four years we’ve really built,” O’Day said. “Coming back to Tahanto brought back many memories.

“As a coach, it’s amazing to see how far they’ve come as players, and it’s important to prepare them for the winter (season),” she said.

The Stags players, who will enter their senior year in the fall, are Emma Medeiros, Lauren Wattu, Jess Forbes and Olivia LaTorre.

“Emma (Medeiros) has been a point guard for us this summer,” O’Day said. “She leads the attack and plays a very good defense.

“She (Wattu) does a lot of little things that don’t always show up on a stat sheet,” she said. “At the end of the day, she is a very important part of the team.

“Jess (Forbes) is Jess, and she leaves it all on the floor for you,” O’Day said. “She is so crucial at both ends of the floor and is a strong leader. She always does what is asked of her and she is the team’s top scorer.

“Olivia (LaTorre) can hit the 3-pointer,” she said. “She has a high basketball IQ and knows what she’s doing there.”

The Clinton women’s basketball team is also well represented in the Tahanto league.

The Gaels’ coach is former junior varsity coach Alison Alvarado, who now coaches the Clinton College girls’ team. She has coached the summer league team for the past two years.

“I love coaching and we’ve held on in the league,” Alvarado said. “The summer league is important because it gets the girls playing, but it also gives them time to work together in a less stressful situation than the winter season would.

“We have an amazing group of girls, showing up every night,” she said. “They are all determined to improve their game.”

The team members, who will be in Grade 12 next school year, are Allie Garreffi, Ava Lemanski, Grace Nelligan and Kassidy Diem.

“Allie (Garreffi) is an impressive leader on the court and always gives you 110% every game,” Alvarado said. “She’s playing really well and she’s a versatile player. In defense, she did the job rebounding for us.

“Ava (Lemanski) is our player of choice, who is very quick and has quick hands in defense,” she said. “She was injured and couldn’t play in the last few games, but offensively she is still one of our top scorers.”

Nelligan is a forward, while Diem is a goalie.

“Grace (Nelligan) is the hardest worker I’ve ever coached,” Alvarado said. “His work ethic is incredible. She is an aggressive player who gives her all on the court every night.

“Kassidy Diem played point guard and is a good defensive player,” she said.