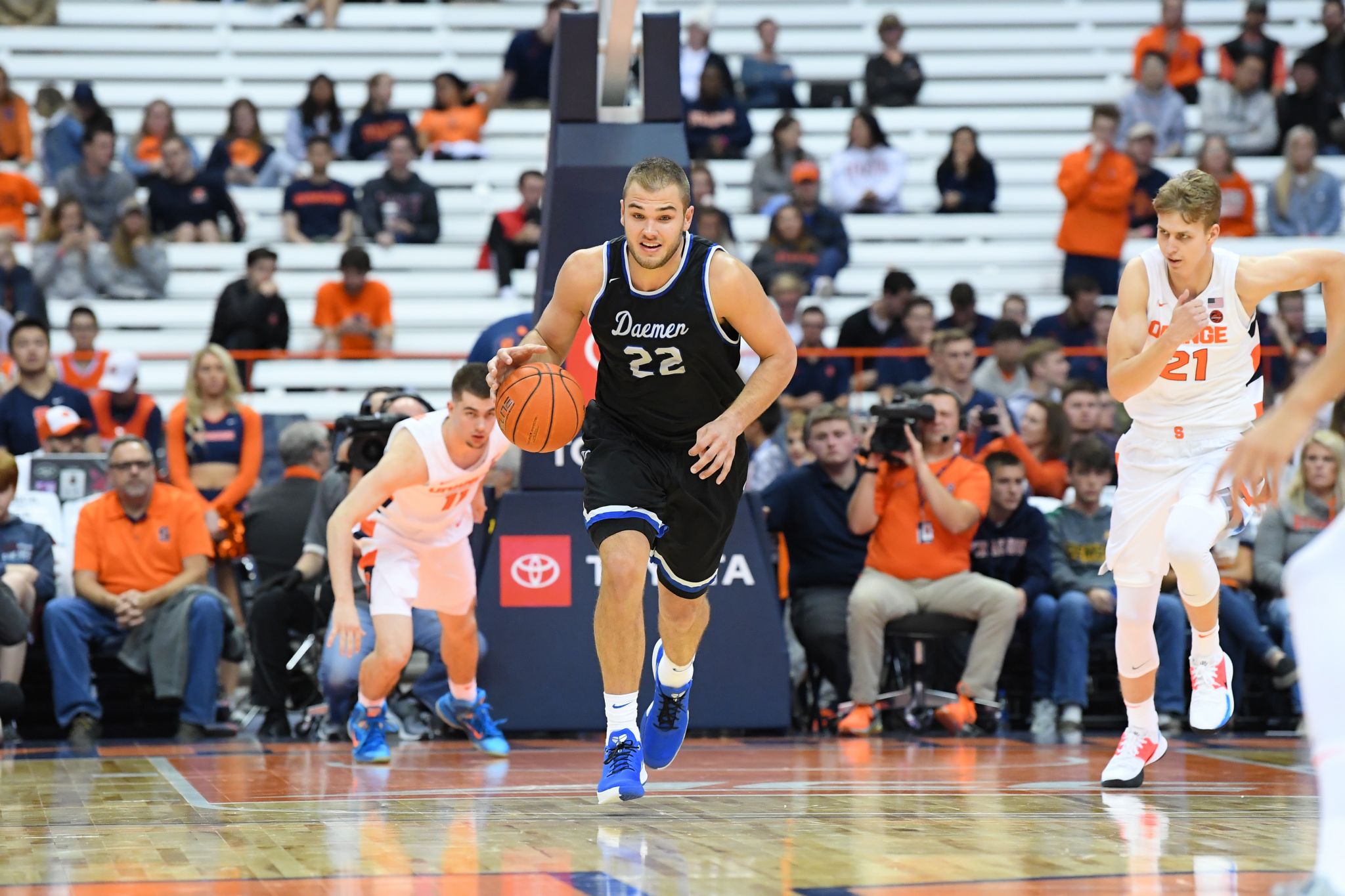 The past week has been a happy and sad time for Daemen College men’s basketball player Andrew Sischo.

On March 4, the 6-foot-9 Guilderland center and Guilderland High graduate was named East Coast Conference Player of the Year for the fourth straight season. He celebrated the honor by scoring 35 points and 14 rebounds in an 85-70 win over Molloy in the league semifinals on March 5, but saw the season and career end with a 59-48 loss to the top seed St. Thomas. Thomas Aquinas during the league game on March 6. He led the Wildcats with 24 points and 13 rebounds.

Sischo, a two-time consensus All-American, led the league in scoring (22.9) and rebounding (13.0) and leads all Division II players in double-doubles with 24 and has been seven times ECC player of the week. He finished his career with 2,888 points, 1,478 rebounds and 84 double-doubles. He is the active leader in all three in all NCAA divisions. He ranks 17th in points and fifth in rebounds all-time in NCAA Division II.

College of Staten Island freshman Messiah Mallory (Watervliet High) was named ECC Rookie of the Year and was picked by the second team. He averaged 14.2 points and 9.7 rebounds for the Dolphins.

The 6-foot-2 junior was named to the SUNYAC conference first team after a strong season with the Brockport men’s basketball team.

The Lansingburgh High graduate was also named to the All-Tournament team. Wallace averaged a team-high 15.4 points per game and had 5.8 rebounds. Oneonta Junior Michael Ortale (Bethlehem Central) was named to the SUNYAC Second Team while Senior Brendan Mulson (Colonie High) earned Third Team honors. Mulson and the Lakers won the league title and will go 27-2 in the NCAA Division III Tournament in Marietta, OH on Friday.

The junior was named North Atlantic Conference Player of the Week Monday after a big week for the SUNY Canton women’s lacrosse team the previous week. The Cohoes High graduate led the Roos to a 3-0 record with 19 goals and 11 assists. She also had 33 draw checks, 10 ground balls and four turnovers. She opened the season with eight goals, two assists and a team record 17 ties in a 16-8 win over Plattsburgh on March 2. She scored eight goals in a 17-11 win over Medaille last Sunday.

The junior finished 12th in the men’s 10 kilometer classic for the St. Lawrence Nordic Ski Team at the New Hampshire Carnival last Saturday and his performance earned the Queensbury High graduate a trip to Midway, Utah this weekend for the NCAA Ski Championships. Beyerbach earned the spot in its final event of the season by collecting 22 NCAA points.

The Plattsburgh men’s basketball team had a 2-23 season, but the Cardinals got a solid effort from the 6-foot-5, 210-pound junior. Salo, a Bethlehem Central graduate, averaged 14.0 points with a team-high 8.2 rebounds per game. Leading hitter Kyle Cary (Ravena-Coeymans-Selkirk) finished with 3.7 points and 3.3 rebounds per game.

The 5-foot-7 senior is a key member of the 17-7 Le Moyne women’s basketball team that will face Science University (Pa) in the first round of the Division II NCAA East Regional on Friday in Manchester, NH The Shaker High graduate was named to the Northeast Conference-10 Third Team after averaging 13.0 points with 103 assists. Junior Saeeda Abdul-Aziz (Mohonsen High) is averaging 11.9 points and 5.3 rebounds per game for the Dolphins.

The 5-foot-9 rookie earned All-East Coast Conference third-team honors for his game with the Staten Island women’s basketball team 6-20. The Troy High grad averaged 10.0 points and a team-high 8.8 rebounds per game. She had 42 assists, 35 steals and a team-high 24 blocked shots. Alarcon had its best game with 32 points and 17 rebounds in a 92-88 overtime win over Bridgeport on Jan. 8.