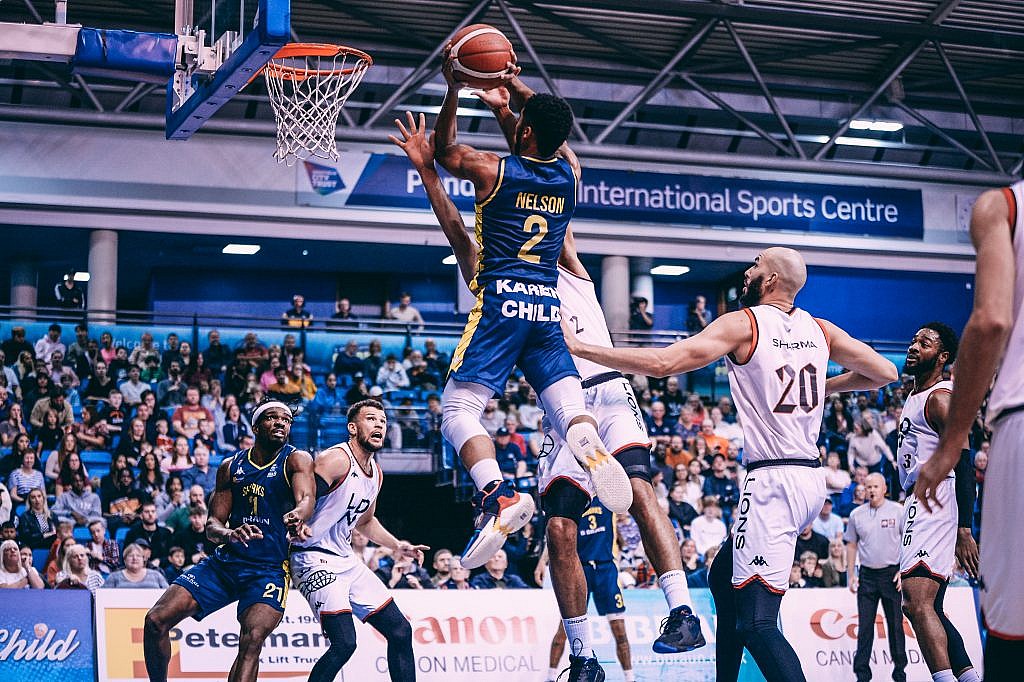 To kick off the Halloween weekend in the BBL, the London Lions had their biggest scare of the season at Ponds Forge thanks to a balanced attack from the B Braun Sheffield Sharks at home.

Between the early games and more recent weeks, the Sharks look like a completely different team, and they look especially dangerous when big man Bennet Koch is able to impose his will. He started well, thanks to the physical play at the rim while hitting and making his free throws repeatedly to score eight points and grab four rebounds in the first quarter and a half. It helped the Sharks take an 18-point lead at one point, but he wasn’t alone thanks to the release of Kipper Nichols and Saeed Nelson.

While Sharks fans were particularly pleased at the start, especially against a team that was 7-0 in the BBL Championship heading into the game, some may have been unaware of the fact that the visitors were still without Sam Dekker as well. than without Ovie Soko, and Kosta Koufos played limited minutes in the first quarters.

That meant they had to rely on Tomislav Zubcic, who was more than happy to collect the extra shots in the first half. But the Lions’ real calling card this season, and in the EuroCup, has been defence. Within a few possessions in the second quarter, Vojtech Hruban reached the finish line on a tough run to the basket, hitting the layup and closing the gap to five with the free throw.

Sheffield managed to slow London’s momentum in the second half and kept some breathing space between the two sides, but the Lions kept the pressure on. It included a fine set when Koufos received the ball at the top of the key with just over five minutes left in the third, he quickly floated it over Zubcic, who didn’t hesitate to go. work.

Lions guards chased Koch on switches in the pick and roll, but the Sharks big man did a solid job of staying ahead of Hruban. But he did well not to be hampered by attackers and flashy guards.

Sheffield weren’t the first team to take a decent lead over the London Lions this season, so even going into the final five minutes of the fourth quarter, a lead that floated between six and ten points never seemed completely assured.

The Lions defense can be teeming and Nelson found himself in both when the Sharks came out of a timeout with a good, elaborate play, but the playmaker dribbled past the long defenders too much. He returned the ball and, in frustration, received an unsportsmanlike foul to cut the lead to six.

Hruban opened up for a long ball to close the gap 81-77, but Nelson made up for the error on the previous possession, and in isolation, after driving to the basket all night, the point guard got up in the mid-range and pushed it back to six points with less than a minute to play.

The Lions came out of a timeout with a play for Zubcic, who had been on fire the entire game. Attentive to his three-point shot, the Croatian went down for a beautiful disputed lay-up.

The Sharks returned to Nelson, who attempted a similar play but had his shot blocked. He landed in his hands so he spun inside the paint as the Lions swarmed so he launched a high arc float which bounced off the backboard and inside which knocked them back up to 6.

A missed three from Hruban and a few free throws from Kipper Nichols made it an eight-point gap, but even with ten seconds left the Lions proved they still had a chance. Aaron Best opened for a three after a timeout and Koufos got the lay-up handed over, but it wasn’t enough as the Lions suffered their first loss of the domestic season.

There were times in the first half of the Bristol Flyers-Leicester Riders match in the latter’s Morningside Arena where either team could have run away with it. The home team went up eight points in the first quarter when Zach Jackson got into the slipstream, after hitting a smooth jumper.

But the visitors had plenty of confidence going into the game as Bristol had lost just one so far this season, and they quieted the proud Leicester home crowd in the second quarter. Tevin Olison equalized and took the lead for the Flyers, and by the time both teams headed to the locker room, it was anyone’s game.

Going into halftime, Marc Loving spoke to the broadcast team and said: “Bristol are playing really hard and getting offensive rebounds so we have to match their intensity. It’s a new half now, therefore, we must go out with refreshed minds and legs.

“They had second chance opportunities on us, and if we had managed that we could be more than two points ahead. We are in a good position at the moment, but we have a lot of work to do.

Leicester’s Patrick Whelan took a tough charge from Flyers captain Malcolm Delpeche early in the third which forced Bristol to seat the big man, and Loving was left with lags after Leslee Smith from Bristol came on. Loving hit a three, then Nelson Henry landed a great, accurate pass over the top where Loving topped his defender into the paint for an easy two that led to a Flyers timeout.

Whelan was the man again minutes later when the England international was called off for a confusing unsportsmanlike foul which was a tight call between a block and a goalkeeper. The call sparked coach Rob Paternostro, who got a technical, but the crowd and Whelan started to get angry and the guard looked like a one-man defense to force a 24-second clock violation.

The Riders continued this momentum. It never looked like a blowout from there, but going into the fourth they extended a six-point lead to 14 within minutes.

Olison of Bristol did not give up the hunt. His back-to-back threes were sparked by good defense as Conner Washington fed the ball to the Riders. The Flyers’ excellent ball movement got Olison open again, but Washington set things right and made up for the error with a jumpshot and his team collectively kept their composure and rebuilt the gap. .

Loving caught up with the broadcast team again at the end of the game and said, “We needed a win. At home, they got the best of us. They played harder than us so we had to regroup. It’s an aggressive team on the offensive boards. That was key before the game, but in the second half we locked that down.

After hearing about the result in Sheffield, he said: “The Lions were unbeaten so I know Sheffield have a lot of confidence so we have to go there with the same energy we had tonight knowing we can get there. .”

The showpiece game to be featured on Sky Sports may not have been seen as a preview of the final, but it’s still early days in the BBL Championship. At the start of the competition, the Plymouth City Patriots were 2-2, with the Newcastle Eagles 1-5, to occupy seventh and ninth place respectively – but that just meant both sides were hungry for a big win in the tournament. a televised game.

It was a back-and-forth affair for the first few minutes as the traveling Patriots took an early lead, but once the Butterflies settled for the Eagles inside Vertu Motors Arena, they started to build a convincing lead at the end of the first quarter.

That stretched to 10 after newcomer Justin Everett hit his first shot in the BBL – a long three-point welcome for the American – and another from Jermel Kennedy.

Plymouth continued to plug in but there were several unforced errors, such as a trip from Rashad Hassan without too much pressure and a scoring opportunity from the low block, then Simons rammed into a brick wall and put the ball back .

Good execution, a steal from Darius Defoe on one side and a lay-up on the other created a comfortable 15-point lead with a minute to go in half-time.

Newcastle’s Ben Mockford added some thoughts on his side’s change in attitude after starting the season with more losses than they wanted. He said: “We move the ball around, that’s what we’ve been working on all week, shooting the ball from side to side. We’ve been focused on sticking to our principles and not staying one dimensional in the ball screens. We’ve been working on us all week. Plymouth are not a team to sleep on so we have to make sure we play defense in the second half.

The Patriots exited the locker room in an attempt to avoid being blown away and ran off. It was messy, but they remained cool under pressure, as shown by Isa Brandon, who entered the lane, took out two players and blasted David Cohn into the air, while Brandon pivoted forward for a lay-up attempt that resulted in a heavy foul.

The clever play resulted in just one point from the free-throw line, but he closed the gap to 14 after losing 21 at halftime.

Newcastle continued to pick up the pace and Javion Hamlet was the man to keep the pace high and the crowd boisterous. A nice backdoor pass from Defoe to a dunking from Everett almost took the roof off the Vertu Motors Arena. But Plymouth continued to nibble.

They closed the gap to 10 with two and a half remaining in the fourth quarter, but it had been a choppy affair, with plenty of fouls on either side. Last week’s All-Star 5 Troy Simons’ frustration boiled over after he hit a one-handed offensive rebound on the glass – he felt there was a foul and slapped the ground as he was rising. He didn’t get hit technical first, so he had to leave the game, leading to Patriots coach Paul James getting a technical and the lead back to 12.

The fight was still there on both sides, but the match would end with the same gap.

After scoring 31 points, Javion Hamlet spoke to Drew Lasker on Sky Sports and said: “We’ve been training hard all week so it’s good to come here and see it put together. My teammates trusted me. The vets told me to keep playing hard and getting down.

To see more of these teams, be sure to book tickets for this exciting season by CLICKING HERE