Palluzzi transferred to Choate to pursue his basketball career 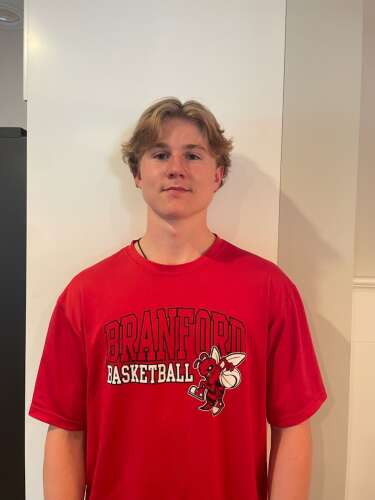 Palluzzi transferred to Choate to pursue his basketball career

Hot on the heels of two stellar seasons with the Branford boys’ basketball team, Jake Palluzzi is taking his talents to Choate Rosemary Hall to further his hoops career in college prep school. Photo courtesy of Jake Palluzzi

Jake Palluzzi averaged 27 points per game for the Branford Boys’ hoops as a sophomore, helping the Hornets to 19 wins while advancing to the state quarterfinals. Photo by Wesley Bunnell/The Sound

Jake Palluzzi used his scoring touch to earn All-Conference accolades in each of his two seasons as a member of the Branford boys’ basketball team. Photo by Wesley Bunnell/The Sound

After growing up as a leader at Branford, Jake Palluzzi wants to take his leadership skills to the next level as he adjusts to the boys’ basketball team in Choate later this year. Photo by Wesley Bunnell/The Sound

After playing for the Branford High School boys’ basketball team for two seasons, Jake Palluzzi transferred to Choate Rosemary Hall to continue his hardwood career. Palluzzi said his time with the Hornets taught him to be more of a leader and is confident the lessons he learned at Branford will stay with him throughout his basketball career.

For the past two years, Palluzzi has played for an AAU basketball program called Project Triple Threat. The team is coached by Drew Dawson, who is also the head coach of the men’s basketball team at Choate, a college prep boarding school in Wallingford. Dawson was impressed with Palluzzi’s performance in his second season that winter and offered him a scholarship to play at Choate. After discussing his decision with his family for about a month, Palluzzi decided that it would be best for his basketball career to play for Choate starting with his next campaign, in which he will be reclassified as a sophomore.

“It means the world to me. It’s an opportunity you can’t turn down,” Palluzzi said. “I think it’s something that will improve my future as a person and as a player.”

Along with his work on the AAU circuit, Palluzzi had two standout seasons as a member of the Branford boys’ basketball team. Playing a combo guard role, Palluzzi averaged 23 points, 4.5 rebounds and 2.5 assists per game on his way to making the All-SCC First Team as a sophomore, marking his second nod. consecutive eye to All-Conference. He led the Hornets to a 19-5 record and a Division IV state tournament quarterfinal appearance this year.

Palluzzi said he was ready for anything before each competition with Branford. He always did the extra work to make sure he could handle any opponent he faced.

“I spent a lot of time in the gym and in the weight room. I just played the game a lot. I was ready to face anyone,” Palluzzi said. “I knew the teams would focus a lot on me. I just wanted to do everything I could to help the team win.

Palluzzi began to prepare at a very young age to become a good basketball player. Palluzzi’s father, Jake Palluzzi, was the head coach of the Branford boys’ basketball team for 29 seasons. Palluzzi spent a lot of time at his dad’s practices, shooting hoops and listening to everything his dad had to say while he taught the Hornets. He would even participate in Branford’s layup lines during pre-game warm-ups.

Palluzzi started playing competitively in 2nd grade. When he wasn’t playing, he watched basketball or talked about it with his friends and family. Always being around the basketball court, Palluzzi’s love for the game took off when he realized he could have quite a future in the sport.

“In the winter, I was always at my dad’s 24/7 practices. I was in the gym listening and watching what he had to say,” Palluzzi said. “I was going to his games and shooting in the lay-up lines with the team. My family was talking about it, my friends were talking about it, I was watching it on TV. Everywhere I went there was basketball .

Over the past two years, Palluzzi has developed his skills as a member of the Branford boys’ basketball team. He was a college starter in his freshman and sophomore seasons.

Although he’s always had a knack for scoring, Palluzzi feels his biggest growth with the Hornets has been as a leader. He would have been one of Branford’s captains during his freshman year. Palluzzi understood that he needed to be more vocal while still taking on a leadership role, whatever team he was playing for. Palluzzi knew he could impact the game with the ball in his hands, but focused more on leading his team and ensuring everyone played together as a unit.

“I really grew as a leader. I wasn’t as focused on myself. I was more focused on how to lead this group of guys,” Palluzzi said. knew I needed to grow more as the vocal leader of my team.”

While growing as a leader, Palluzzi continued to make game-changing plays for the Hornets. Whether shooting or passing, when the game comes down to the wire, Palluzzi knows what to do when he wins the ball and is always ready to put his team in position to win.

As he enters his freshman year at Choate, Palluzzi’s biggest goal is to become a more complete basketball player. In recent training, he has focused on playmaking drills. Already established as a prolific goalscorer, Palluzzi wants to do more ball handling and become an even bigger force on the attacking side of the pitch.

No matter where he dresses this year, Palluzzi feels happy just playing basketball. Palluzzi moves to Choate in an effort to improve his basketball career. As he begins a new chapter, Palluzzi hopes to continue his career on the pitch for as long as possible.