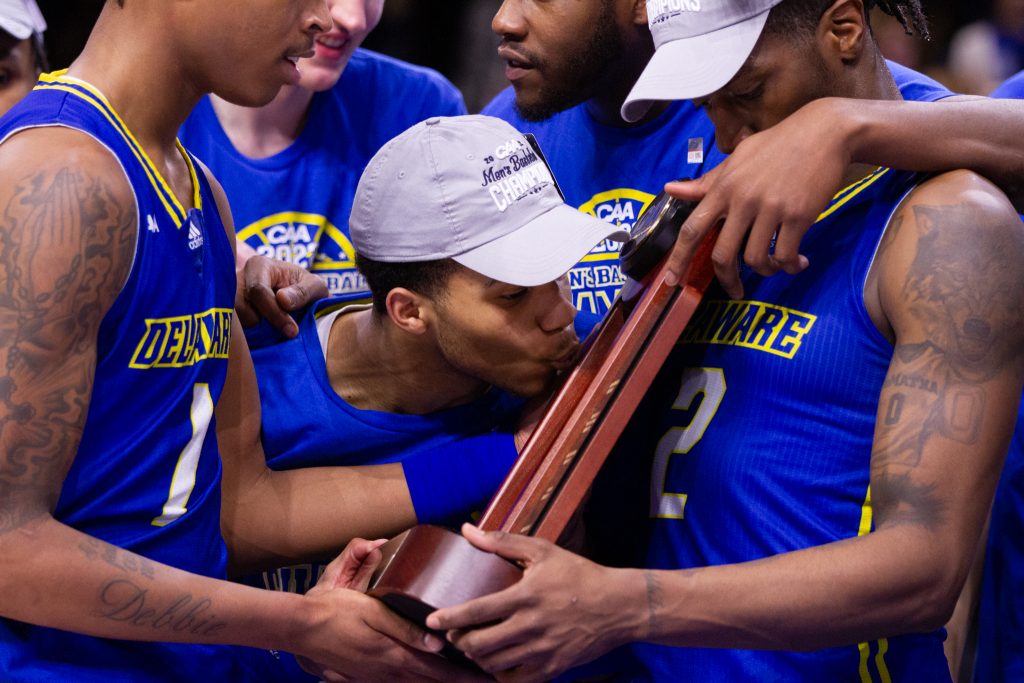 Even after the Blue Hens’ victory in the Colonial Athletic Association (CAA) conference tournament, in addition to being the son of a former NBA star player, point guard Jameer Nelson Jr. continues to go with the flow a “day-to-day”.

“I’m ready to go wherever the ball takes me,” said Nelson Jr.

The son of Jameer Nelson Sr. and Imani Nelson made his presence known from his high school days in his hometown of Haverford, Pa., where he led his high school to an undefeated season and a class state championship. 5A. Additionally, Nelson Jr. received second-team All-State honors, averaging 15 points per game on the season.

Progressing in his college basketball career, Nelson Jr. first set foot at George Washington University in Washington DC. There he was the team’s fourth-leading scorer, averaging just over 10 points per game, while starting in 28 of 31 games throughout his first year. year.

During his sophomore year, however, Nelson Jr. saw his playing time regress.

“I had a pretty good first year there, and then in the second year they got transfers,” Nelson Jr. said. “It didn’t go as well for me. I felt like the next step in my career had to take me somewhere else.

Nelson registered his name in the transfer portal, which led him to the next step in his college career: the University of Delaware.

In his first year as a Blue Hen, Nelson Jr. concluded the 2021-22 regular season as the team’s top scorer. He averaged 13.7 points per game on 45% shooting from the field, including 37% from beyond the three-point shooting arc. Nelson Jr.’s junior season also earned him All-CAA Second Team honors.

Success at the college level is no stranger to the Nelson family.

Nelson Sr. received the Naismith Award and the Wooden Award while at Saint Joseph University. Both awards recognized Nelson Sr. as the most outstanding player in men’s college basketball during his senior season.

Nelson Sr. would go on to enjoy a 14-year NBA career, which included an NBA All-Star selection in the 2008-09 season as a member of the Orlando Magic, before retiring in 2018. In 2020, Nelson Sr. was named Assistant General Manager for the Delaware Blue Coats of the NBA G League.

His son, Nelson Jr., has spoken a lot about him and how he influenced him throughout his life.

Following the Blue Hens’ CAA Tournament win, Nelson Jr. shared a group hug and tears of joy with his mom and dad.

The moment was trending on social media, with basketball fans around the world seeing both Nelson Jr. and Sr. bond in happiness.

Nelson Jr. said his father always passed on words of inspiration to him.

“He always says if you do it the right way the first time, you don’t have to go back and fix anything,” Nelson Jr. said. “I usually remember that.”

That advice paid off, as Nelson Jr. and the Blue Hens became the first No. 5 seed to win the CAA Championship. Nelson Jr. said he was thrilled to be part of the first Blue Hens team to play in the NCAA Tournament since 2014.

“It makes me feel good,” Nelson Jr. said. “I’m happy for my team. I’m definitely happy for seniors, they can come out with a bang.

Nelson Jr. said the team is focused on the present right now before the tournament, instead of thinking about what the future holds for the Blue Hens.

“We just take it day by day,” Nelson Jr. said. “I just try to work, improve, compete with each other and try to get wins in the tournament. “

This “day-to-day” basis is the same mentality that Nelson Jr. holds for himself. Nelson Jr. is in no rush to make any future plans, especially with two years of eligibility for the rising young Blue Hen star.