Holderness graduate recalls how school prepared him for a basketball career 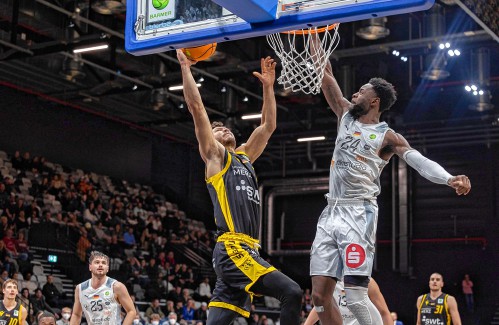 Holderness graduate recalls how school prepared him for a basketball career

3,600 miles from his home in Frankfurt, Germany, Roland Nyama’s first impression of life at Holderness School was: “New Hampshire is weird.

“The school is in the middle of nowhere,” recalls Nyama, a 2013 graduate, with a chuckle. “The biggest adjustment was probably the language barrier and some cultural differences. You walk the streets and people say, ‘Hi, how are you? In Germany, nobody does that.

Now 28 and in his fifth season of German professional basketball, Nyama credits Holderness with helping him develop the work ethic and discipline needed to succeed on and off the court.

“That’s the cool thing about (Holderness): they do everything to make you, not the best students, but the best humans,” Nyama said. “You wear a shirt and tie in class – on my first day of school I had to watch a YouTube tutorial on how to tie a tie because I didn’t know.”

A self-proclaimed temperamental kid in Frankfurt, Nyama remembers cut school days, practices he was expelled from, and an occasionally overactive mouth.

In New Hampshire, these habits were quickly broken.

“The key words are discipline and consistency,” he continued. “The teachers kicked you out of class if your shirt wasn’t tucked in, if your tie wasn’t the right one, if you weren’t wearing the right shoes. It makes waking up to go practice or go to work so much easier when you graduate from such a school.

A lesson learned from his assistant basketball coach and chemistry teacher, Randy Houseman, also stayed with Nyama well into adulthood.

“He gave me a D+ on my final exam,” Nyama recalls. “I asked him why you gave me a D?” He said, ‘You didn’t get it, you deserved it.’ Everything you do has real-life implications.

A 6-foot-6 guard/forward, Nyama played on the German national under-17 team and grew up playing up against future NBA player Dennis Schröder.

“Me and Dennis were buddies at 13, and we always talked about the NBA,” Nyama said. “He has one of the craziest work ethics on the planet and has the most confidence in his game.”

Joseph Touomou, a former teammate of Allen Iverson at Georgetown and a figure in Cameroonian basketball – the country of origin of Nyama’s parents – helped bring him into Holderness.

“He’s a really good person and overall one of the best athletes I’ve ever coached,” said then-Holderness head coach Tony Mure. “He’s extremely fast with long arms and has a great jump shot and is great in transition. His greatest asset is his defense. Some kids like to play defense, and he’s one of them. He’s tenacious, keeps coming at you and is good on the ball and off the ball.

“American (high school) basketball is much less structured,” Nyama said. “It’s a lot more one-on-one – raw athleticism and raw talent. You’re allowed to travel – in Europe you have to put the ball on the ground before you dribble; in the US you’re allowed to step It’s much harder to defend because the opening step is faster.

“In NEPSAC, you’re probably going to play against a future NBA player every day,” Nyama continued. “You better bring your A-game.”

“I remember Georges Niang iso-ing five times in a row; I remember Nerlens Noel getting every alley-oop dunk with no play calls or having to do any reads,” Nyama recalled. “They were so good.”

Since 2017, Nyama has bounced back in the German Pro A basketball league, having stints with the Tübingen Tigers, PS Karlsruhe Lions and currently the Nürnberg Falcons.

“The main thing for me is safety, because I had a baby on the way (last summer),” Nyama said. “I opted for a two-year contract in the German second division, but with a big role. Often you are paid more playing an important role in a lower league than as a rotation player in a first team league.

According to Nyama, his goal is to spend another five years in professional basketball with the hope of playing for the Cameroon national team before embarking on what he believes is his true future.

“I want to be a youth coach,” Nyama said. “I want to teach and be a mentor for young people who play basketball. I think it’s my calling, because I had a lot of problems as a teenager. I took basketball as a metaphor for life and thought I knew it all.

A lot of that comes from the impact mentoring had on him as a kid away from home in a “strange” new place.

“I had to be on my best behavior; I was afraid of being a strong student (seeing other students expelled),” Nyama said.

“I learned to love Holderness. I am still in contact with all my coaches, my history teacher, my English teacher. They are good guys and they accepted me and treated me like family .