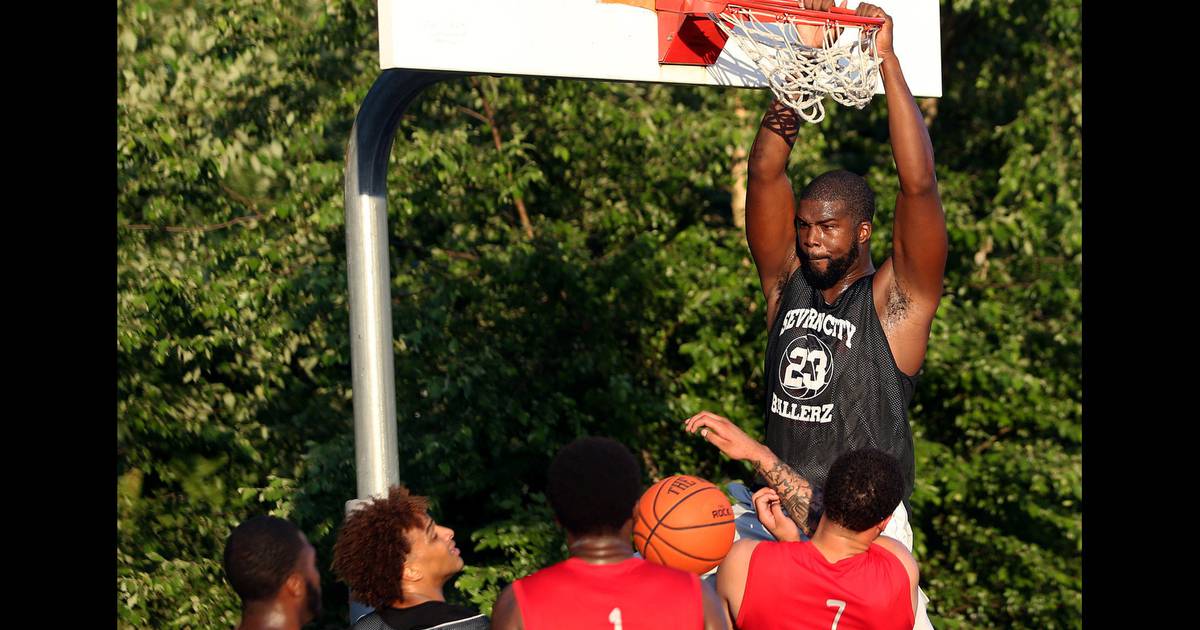 It’ll be the old guard against the new wave in the Annapolis Summer Basketball League Championship Game.

Perennial powerhouse BIG is chasing its ninth championship, closing in on the league record of 12 held by Harris & Sons. In its own way, Next Up, which is trying to make history as the only freshman franchise to win the title.

The defending champ BIG (11-2) takes on Next Up (12-1) Friday at 7 p.m. on the outdoor courts at Truxtun Park. Both teams are primarily made up of players from northern Anne Arundel County.

BIG coach Tyrone “Stixx” Jones graduated from Meade High and built his franchise with players from the Severn area. Next Up player-coach Chris Simmons graduated from Old Mill High and filled his talent roster from his alma mater with Glen Burnie, Meade and North County.

“Next Up is a strong young team with talented players,” Jones said. “I call them little BIG because they look a lot like us.”

Simmons sank three shots from beyond the arc to stake Next Up to a 37-30 halftime lead over Stanton Center. Guard Camari Wilkerson used a series of impressive moves to hit the hoop for 10 points per intermission.

Swingman Jermaine Young, a Broadneck product who spent the past two seasons at Anne Arundel Community College, sparked a brief rally to start the second half as Stanton Center tied the score at 40. Simmons quickly called time out after left-hander Craig Pratt (Annapolis) swept a 3-pointer on one of his signature high-arc shots.

Forward Tre Dunn (Meade) turned the tide with a spectacular follow-up dunk – jumping high to grab the rebound with one hand and throwing it in the same motion.

Borden then warmed up, knocking down straight 3s to put Next Up back in front, 50-40. Wilkerson (Old Mill, Wingate) finished with 12 points, while Kyjuan McCallum (Meade) tied Simmons with nine.

Damonte Dodd, a 6-foot-10 center from Maryland who now plays professionally in Poland, scored 15 points and grabbed eight rebounds to lead Stanton Center (3-11). Pratt scored his 15 points from beyond the arc, while Young had 13 points for the No. 12 seed, who caused a pair of upsets to reach the semifinals.

“I thought we had a solid game plan and all nine players came out and executed it,” Simmons said. “We don’t have a stall when we go to the bench and we bring it hard from start to finish. We tend to burn out teams.

Simmons credited Wilkerson with setting the tone in the first half and praised Borden for “bringing it home.” Dunn teamed up with Kris Peet (North County) and Meikhi Simmons (Glen Burnie) to control the panels at both ends.

“I felt it and turned off the lights today,” said Borden, an Annapolis-area Christian School product who currently plays at Millersville University. “They are a very talented team who are also very disciplined and hardworking.”

Simmons hoped BIG would win the second semi-final as they were the only team Next Up lost to during the regular season. “I really want me back,” he said.

BIG was playing without two of its best players in Mahzi Thames and Antonio Wright, both Meade alumni. Thames, a leading contender for the regular season’s Most Valuable Player award, started school at Virginia Union. Wright, the team’s veteran leader, returned to Mexico where he plays professionally.

POD, which is an acronym for Puddle of Dreams, was unintimidated by the defending champions with little guard AJ Burch embodying the tenacity of the sophomore franchise. Burch (Severn School, St. Francis) was aggressive throughout destroying the defense to set up or set up others.

Burch hit a tough pull-up then followed with a 3-pointer as POD rallied to take a 29-26 lead with 12:18 remaining. It was back and forth the rest of the way with Avion Robinson (Old Mill) making two free throws to give BIG a 44-42 lead with 17 seconds left.

POD coach Greg Johnson called timeout to set up a play and Christian Jones (Annapolis, Navy) delivered – driving a right and jumping a foot before sinking an 8-foot runner who tied the score with 2.3 seconds to go.

Bruce Spruell completed a layup in traffic and was fouled, converting the 3-point play that put BIG out for good in four minutes of overtime. Avion Robinson (Old Mill) made his four free throws in the final minute as the defending champions held.

“It was a tough game and I’m proud of our young boys for holding it together,” Jones said. “We are much younger than before. Few of these guys were on championship teams in the past, but they understand and want to keep the tradition going.

Robinson scored 13 points and played tough defense for the winners. Center Travis Hyman had nine points to go along with 11 rebounds and four blocked shots.

“We’re relying on younger guys more than ever and that inexperience showed up at times tonight,” said Hyman, a 7-footer from Old Mill and Bowie State who has had a lengthy pro career. “We came together as a team and showed a lot of heart when the game was on the line.”

Hyman is very familiar with the Next Up roster and knows the challenge BIG will face on Friday night. “It’s a young and athletic team that likes to run. We have to slow down the game and get them to play at our pace,” he said.

“We just need a little more experience. You have to go out and beat the defending champions,” Johnson said. “I’m proud of the way we fought in regulation time, but I thought we gave up too soon in extra time.”