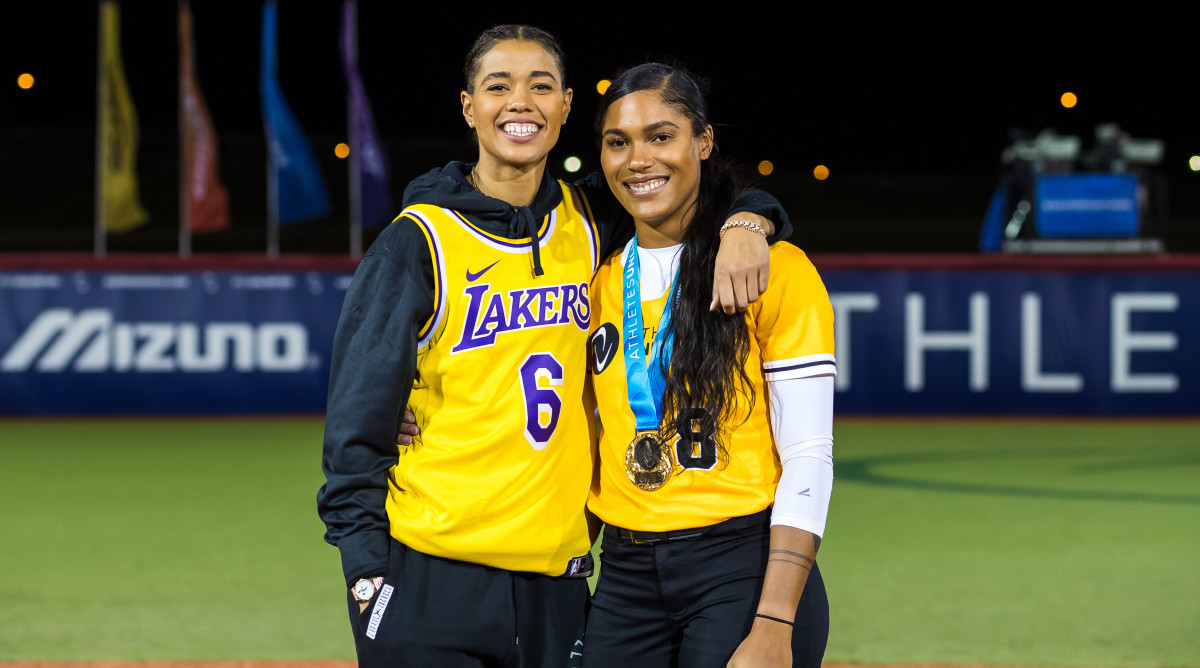 When Natasha Cloud reached the WNBA Finals with the Mystics in October 2019 – the pinnacle of her basketball career – the most important person in the point guard’s life was halfway around the world.

Cloud’s fiancée, Aleshia Ocasio, was pursuing her own profession playing softball in Japan. The two hadn’t seen each other in over a month when, on a whim, Ocasio hopped on a 15-hour flight from Tokyo to Washington to catch the opener of the finals.

“I just wanted to see Natasha play in the championship,” Ocasio said.

Ocasio saw Cloud score 13 points as the Mystics beat the Sun, 95–86. The following day, Ocasio returned to Japan and missed the remainder of the series, which the Mystics won in five games after Cloud got through. guarantee.

“I wasn’t really there when they won the title,” Ocasio said. “But I wanted to be part of it any way I could. So, I made this long flight just to see her for about 24 hours.

The power couple’s relationship has been largely long distance since they began dating — like many modern romances, with an Instagram post — in 2018. Two years later, they tied the knot on October 20. Yet, because their seasons run concurrently – and their matches are often hundreds or even thousands of miles apart – they’ve only been able to cheer each other on from the stands a handful of times.

“We watched each other a ton on TV,” Ocasio says. “But I don’t think we’ve seen each other play in person more than 10 or 12 times.”

Fortunately for the couple, everything is about to change. Cloud is a founding member of Athletes Unlimited Basketball, a new professional league that begins January 26. The league, which has 44 players, including 16 of Cloud’s WNBA colleagues, will compete in a five-week, 30-game season. entirely in Las Vegas. Commentators include three-time WNBA MVP Sheryl Swoopes, with games airing on Fox Sports, CBS Sports Network and Bally Sports in addition to streaming on Athletes Unlimited’s digital YouTube channel.

The league offers women’s basketball players another chance to play professionally in the United States rather than overseas. But the ability to stay in the United States isn’t the only innovative thing about Athletes Unlimited: it offers a new model for professional sports leagues, drawing inspiration from fantasy sports and appealing to fans, especially younger ones, who are more attracted to individual athletes than to teams. The league has no team owners, coaches, or even fixed rosters.

Each week, the top four points scorers are crowned team captains and draft their squad for the following week with fan input. Athletes Unlimited will crown an individual winner at the end of the season based on points accumulated from team wins and individual stats on both sides of the ball.

Cloud, who retired from the 2020 WNBA season to focus on social justice reform and signed a new contract with the Mystics last March, was the first player to join the basketball league from the AU. She then spent the next few months recruiting players to join her.

“Some people still need convincing,” Cloud says. “They were like, ‘Hmm, I might need to see you play a year first.’ I totally understand that, but we’ve also had a lot of people say, “We’ve been waiting for this moment. We’ve been waiting for someone to believe in us, invest in us, keep us home through the offseason.”

Cloud didn’t need much convincing for herself – she had seen the league work firsthand through his wife. Ocasio enjoyed a successful amateur softball career, launching Florida to an NCAA championship in 2015 and helping the Puerto Rico national softball team win a bronze medal at the Pan Am Games that same year. But Ocasio found fewer opportunities professionally.

When Athletes Unlimited launched a softball league in August 2020, Ocasio was among the first group of 56 players who competed in a bubble outside of Chicago. In 21, Ocasio returned for a second season and won the league championship as the individual points leader. Not only did the pitcher pitch four complete games and compile a 2.32 ERA, but she also led the league with a 6–5 record, 55 strikeouts in 66 innings pitched and tied for the lead with 13 appearances.

“There wasn’t a lot of pro softball before,” Ocasio said. “Growing up, we played for a scholarship, so we could go to school for free. That was it. Now that there is an established league, it has created a huge change in our sport. It gives softball players the hope that they could turn professional and that gives our sport more visibility.

In 2020, Ocasio and Cloud’s schedules finally aligned, and Cloud got to attend one of Ocasio’s final games in Chicago. It was there that Cloud met Athletes Unlimited co-founders Jon Patricof and Jonathan Soros.

“I thanked them for bringing the league to softball, a women’s sport that desperately needed people to invest in it and see the value in players and their value,” Cloud said. “I said, ‘I love what you do for softball, but when are you all going to bring it in for basketball? “”

Patricof assured him that it was on his agenda and that he wanted his opinion. About 11 months later, Cloud’s phone rang.

“Natasha was the first person we called when we decided to go ahead with a basketball league,” says Patricof. “She’s been a big part of being the leader of our Players’ Executive Committee. She’s helped identify other players who she thinks would make a great grassroots leadership group. She’s involved in all the big decisions.

Basketball will be the fourth league in the Athletes Unlimited network, following softball, women’s indoor volleyball (launched February 2021) and women’s lacrosse (July 21). Patricof thinks the opportunity is ripe for women’s hoops, on the heels of the WNBA’s most-watched regular season since 2008. 20.

“We’re seeing strong ratings both at the WNBA and at the college level,” Patricof said. “So we think there’s a fan demand for more professional, high-level basketball.”

“A lot of good players come out of college and don’t get drafted into the WNBA because there’s only 144 spots,” Patricof said. “For players, even those in the W, the off-season alternative has always been to go away from home and play a long and sometimes grueling season. When we started talking to female basketball players , the general reaction was: there are not enough playing opportunities for us, either in the United States or in the world.

Patricof, who served as president of New York City FC before founding Athletes Unlimited in March 2020 with Soros, was struck by how little collaboration he saw between sports leagues, both men’s and women’s. To address the situation, Patricof and the league have created cross-sport collaborations, including a racial equity task force, which Ocasio helps lead. Athletes Unlimited also pairs athletes with mentors in other sports.

This experience includes workouts and networking opportunities for athletes from all four sports that focus on everything from personal branding to financial literacy to mental health. Abby Wambach and Jessica Mendoza are among the athletes who sit on the advisory board. The league even hosts cross-sport holiday parties.

“It’s a group of strong women who all have a stake in this league, which is unlike anything that’s ever happened in women’s sports,” Ocasio said. “We have a say in everything, even our uniforms. It is a unique networking space. I actually met one of the women I got to know through the Racial Equity Task Force when I was in DC. Now we talk regularly. I think UA opens a lot of doors through sports.

This season, Ocasio won’t have to rely on social media feeds or updates to follow his wife’s matches. Ocasio will be there in person.

“I booked my flight to Las Vegas to watch the home opener on January 26,” Ocasio said. “And then next week I’ll be there for his three games.”

While Ocasio’s presence will bring added pressure to Cloud, who feels the urgency to match his wife’s accomplishments, she also sees it as added motivation.

“She won the whole league last season. I’m just trying to match his greatness,” Cloud says. “But I don’t care about a little pressure. It will add fuel to my fire. And there will certainly be a bet.

Despite all their collaborative spirit and support, Cloud admits that the two are still competitive, even with each other. Ocasio frequently shows off his shooting skills in Instagram reels, but admits Cloud, a multi-sport star who was a quarterback for his junior football team and a softball outfielder, might have a better arm.

“I’m like, ‘Why can she throw so far? ‘” Ocasio said. “But I think if she was placed in a real softball game, she would be in trouble.”

Regardless of how the Athletes Unlimited basketball season is going for her personally, Cloud already considers the business a success because of the opportunities it will create for the next generation of female athletes.

“The league has done a tremendous job of investing in women, believing in them, and giving women the resources that weren’t provided to us elsewhere to allow us to be successful and live those dreams,” Cloud said. “From the time boys are young, they can dream of going to the NFL, NBA, MLB and MLS. But for little girls, it’s always been different. AU gives every little girl in these four sports – and they will continue to grow – a real dream come true.

Aimee Crawford contributes to BonSport, a media company dedicated to increasing the visibility of women and girls in sport.