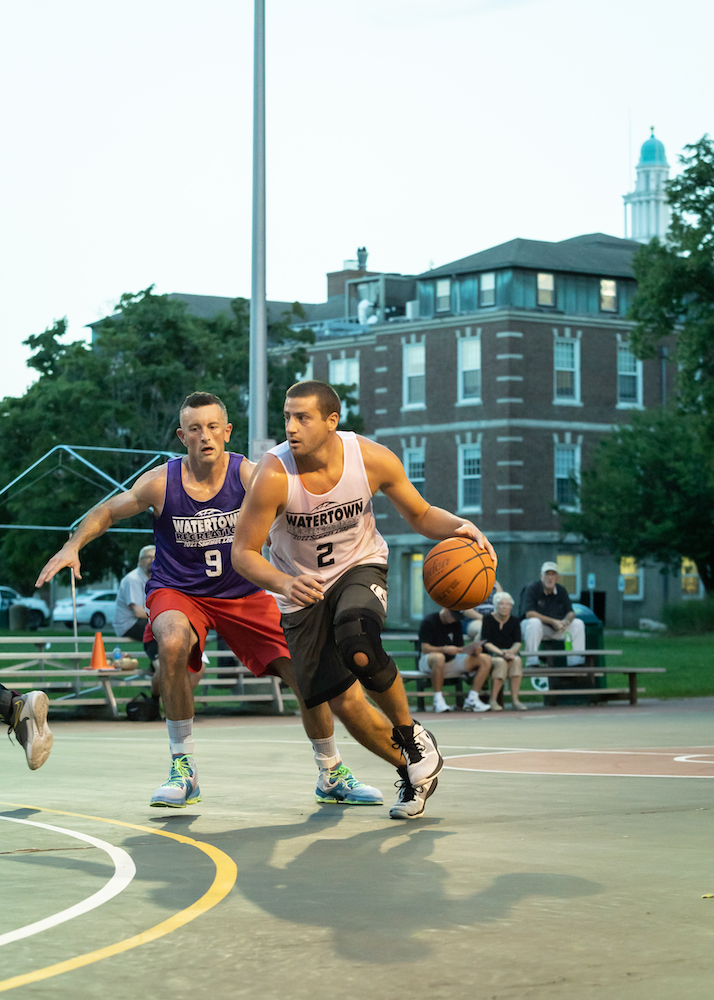 Watertown’s two summer basketball leagues played out a deciding third game in their respective finals this week. The competitions, which feature current and former college basketball players, are managed by the Watertown Recreation Department, which provided the following accounts:

Championship Tuesday was everything it should be, great competition, great crowds (a few legends mixed in), lots of food and refreshments. Just a great night out for our Watertown Recreation Department Men’s Basketball League family.

Similar to Game 2 of the series, Control Club got ready to play in the second half after being trailed 23-20. The magic formula for victory was once again excellent defense, ending Kaos Club’s offense by allowing just 10 points, helping Control Club win the O’Brien-Jerahian Championship by the score of 41- 33.

Most Control Club agents have contributed to their championship in many ways, excellent defense and balanced scoring to name a few. Control Club have 7 players totaling points, while Nick Rosetti was the top scorer with 16. Mike Simoni was once again exceptional for Kaos Club, scoring a game-high 17 points.

We were all thrilled to see Mrs. O’Brien, Billy’s mother, attend the game and be recognized by the league, players and fans. Billy O’Brien died suddenly in his early thirties and the league is co-named in his honor.

After losing the first game of the Papas Elite Finals, defending champion New Day fought his way to a back-to-back championship by limiting the mighty Donohue’s Kaos Club by the score of 52-46.

As in the previous 2 games, this game was very energetic, emotional, competitive and very entertaining. Each team boasts a plethora of young and veteran talent, with plenty of basketball experience. The game was tight again and included several lead changes during the event. New Day had multiple player contributions, three in double digits.

We were delighted that our friend Raffi Boyadjian came to see the matches. Raffi and his wife Sandy are the parents of Raffi Jr. who died tragically at a very young age. Raffi Jr. was a fan favorite of summer league players.

Thanks to Butch Stearns, Lead Sports Anchor for Fox 25 Sports for supporting and creating this segment which aired Wednesday, August 31, 2022: WATERTOWN.mp4

I would like to thank the following people who made this season such a great success: Our score table staff were amazing: Thanks to Lindsay Graham, Paul Chase, Kevin Greene, Malcom MacDonald, Ruben Sara and Hunter Weissman.

Our officials have done an amazing job this year letting games play, but making sure everything is under control and fair. Thank you to our fans who supported the league and certainly congratulations to all the players in both leagues for their great play and commitment to our Watertown Summer League.

Thank you to our fans who supported the league and certainly congratulations to all the players in both leagues for their great play and commitment to our Watertown Summer League.

Thanks to Natalie Nigito Photography for providing outstanding photos.